One could think that water supply should be easy in an area situated at the foot of the Himalayan mountains. Visitors soon understand that things are not so simple. One of our main aims for the present year is to solve the difficulties the school faces in that matter. We unite our means with a Dutch association to finance the project.

Children in the hostel do not get to drink, wash and use water for personal hygiene from the existing PHE (Govt. supply line) which is extremely insufficient even to meet the need of hostel kitchen’s requirement.  Moreover, the water is released once in three or four days from the supply pipeline which hardly fills a quarter of reservoir the school has (15000 ltrs)…

They are compelled to rise so early because they have to reach various small streams (locally called DHARA) spread over a radius of 1500 metres from school to wash and fetch water for personal use and drinking purpose for the day.

Those children who have to wash clothes and take bath leaves hostel as early as 3 AM.  There are four such streams which is frequented by our children. Two are common for men and women, one is exclusively for girls (ladies or ‘Katie’ Dhara) and another for males (called Police Dhara).

The reason our children have to wake up early and reach these streams before others do is…these places get crowded after 4.30 – 5.00 AM.  Once the local residents start pouring these streams, I was reported that our children are most often pushed aside and not given space to use water…

It’s so hectic and suffocating for children, I honestly do not believe if any of the children in hostel get to enjoy real learning.  How can a child sit and do genuine self-study by waking up early morning, go out to stream that’s far off, wash and fetch water, attend prayer and breakfast within a space of one hour, change uniform and get ready for school that starts at 8.50 AM. It’s incredibly exhausting morning rush hour routine.

Although I have changed the hostel time table and made it more flexible, I still apprehend whether children here at CST Kalimpong get sufficient time for self-reflection, thinking time and learning.

The vehicular traffic in the main road which our children have the walk through to reach streams is full speeding cars, trucks, buses, motor cycles and other vehicles.  Besides traffic, the road leading up to streams are often crowded with loiterers (many of them in drunken state) for whom our children are soft target for eve-teasing, bad mouthing and unnecessary threatening. Most of the senior girls have been the victims of eve-teasing and foul languages from these loiterers on a countless number of times.  Fortunately, nothing serious has happened to anyone as yet, but the danger always looms large and unless we have sufficient supply of water within the campus, the school has to dare to take the risk…

Some of the boys take advantage of circumstances and walk not only up to the streams but all the way to main market and elsewhere. There are unofficial past reports of some children coming to hostel late at night in drunken state.  Their expulsion from hostel is intended to send a clear message to others and especially the newly admitted boys that the school has zero tolerance policy with regard to substance abusers…

…The senior girl’s toilet is kept reasonably clean.  They collect “waste-water” from the kitchen (located just below their dormitory) and use it to clean the toilet.  The cook stores aside “utensil-washed” dirty water and the girls make use of it to clean their toilet.

The senior boy’s toilet is altogether a different place.  Anyone can smell the stink that comes out of it from as far away as 30-40 meters.  Since tissue paper is expensive for children, they use any other paper that they find free, most often blank note book pages.  I have made it mandatory for the boys to at-least burn all the “used dirty papers” every morning.  However, lack of water prevents even the designated sweepers to keep the toilet clean and therefore they just sprinkle some phenyl and leave the rest until the “water-day” (once or twice in a week) to flush out the dirt….

Nevertheless, of the many problems this school is engulfed with, water scarcity is the single most important issue and any solution to this problem will automatically alleviate most of the other problems that our children face today. 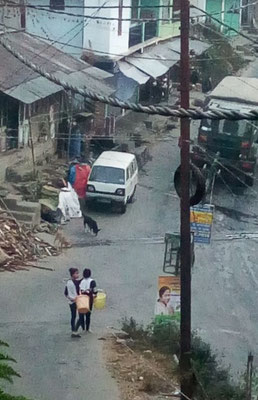 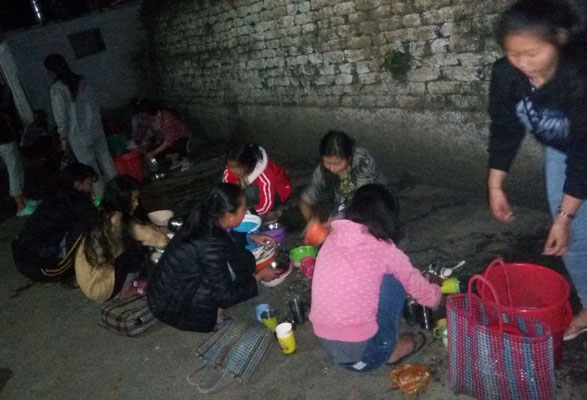 …Students staying in the hostel have to face major water scarcity. They cannot fulfil the proper hygiene needed. As water plays the important role in personal hygiene. Scarcity of water affects health of the students which distracts them from books and classes and we hardly see the dispensary empty. Students drink water from the tap or from the pond. Those who can afford buy bottles of mineral water and travel across the road to the dhara to get bath and wash clothes. Hardly see our bathroom open and full. There is a small chumik (like a pond) which gets filled during the monsoon and runs through a thin narrow channel and gives smiles on many faces because it eases the students to take bath and wash clothes. But since it is very small, the water gets dirty soon and the next one has to use the same or wait till it gets cleard which is sometimes difficult if the queue is long. There is no daily supply of water in toilets. Which provokes more infections. Once a day, it is been flushed in morning and next flush is in next morning. It was in 2013 and already 4 years passed. I hope the students do not face the same problem now or in future.

A message  sent by the Tibetan Settlement Officer in Darjeeling, on sept, 29th.

"I am so sorry that I could not get  contact you for the last  104 days  due to sudden strike called by the political party of Darjeeling in demand of  separate state Gorkhaland after a small incident  between police and the support of  Gorkhaland during the  Cabinet meeting of  West Bengal held  in Darjeeling on 14/06/2017  and since then  there was prolong strike in Darjeeling.

After 104 days  of  indefinite Strike for a demand of Separate State Gorkhaland called by  the most  powerful political party of Darjeeling since 14/06/2017 has been called off now  a few days back after the settlement of  getting  Gorkha Hill Council Administration instead of Gorkhaland.

During  104 days months of strike all the business establishments, schools. colleges, government and non government offices,all tea gardens, transports everything was  uncertainly   closed after the incident  and everyday there was mass public  rallies and meeting  for a demand of Separate state in Darjeeling and for which  all the  communities of Darjeeling  had to be present  and  participated in the protest rallies as per the instructions of  major political party  of Darjeeling if not they will be threatened  and during strike periods  many of the Govt. offices like tourist offices, forest offices, B.D.O. offices, Police out posts and  police Vans and cars and offices of opposition political parties and their houses  had been set on fire by the mobs in and around Darjeeling.

During public rallies for the demand  of Gorkhaland  in three subdivisions of Darjeeling due to the incidents of  teasing and throwing stones  on police party by the supporters of movement and as such    police had to open fire and  killed eleven persons  in  firing and several persons were   injured and   more than two hundred of supporters of movement  had been arrested and sent to Jail during  104 days of strike.

Due to serious situation of  Darjeeling during Gorkhaland agitation all the internet services and all the  T.V. local channels had been blocked by the Government  for their security reasons and as such there was no internet since three months. Therefore, we were quite unable to contact you for  more than three months  because of  internet services.

Now the situation has becoming normalize as all the business  establishements,schools and colleges, govt. and non-govt offices and tea gardens  are opening slowly and all the  transports also resumed as usual manners  and as such our  handicrafts centre and  office are also opened a few days back so I am sending this small note of information about Darjeeling’s incidents for Seperate State Gorkhaland movement and its results for your kind information.

We all are  very  sorry for those who lost their lives in the demand of Gorkhaland movement in and around Darjeeling during three months and we all  offer prayers for their lives remain in peace in heavenly abode. During the strike periods of  104 days of strike  centre and its people never had any  problems  because we were helped to get all the necessary items  from Siliguri  with the help of administration and there was no tension for  anything ."